This story begins with the untimely demise of my iPod Touch.  It was an apocalyptic day.

But once I’d calmed down, I dragged myself out of my “deep depression” (aka chocolate-covered waffles) and booked myself an appointment at the Genius Bar.

For quite some time, my buddy, Andrew, has been encouraging me to go to the Apple Store to prowl for men and telling me that these fellow Mac-users would likely be great potential dates for me.

Andrew has a point.  Guy loves Macs.  I love Macs.  And we’d probably love each other!  Why?  Simple mathematics:

The day of my appointment, I awoke with a spring in my step.  I put on my pretty face, put on some freshly laundered clothes, and made my way to the Apple Store.

As I approached the Genius Bar, I was overwhelmed by the collective nerdy hotness that was emanating from the Genii in their matching blue t-shirts.

I had found nerdvana. 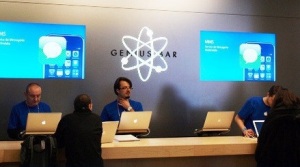 When I was summoned to the counter — my heart fluttering with excitement — the greeter waved someone over and said, “Hey, I know you’re a computer guy, and she’s here for an iPod problem, but…”

As I was pulling my dead iPod out of my bag, I heard a deep voice say, “Oh, it’s no problem.  It’s all the same really.  I’ll take care of her.”

Thank god.  I couldn’t wait any longer to have my iPod fixed.  When I looked up, my eyes settled on the sexiest man-thing that I’d seen in a while.

Nerd-chic is so hot right now.

In other words, I placed my order with the universe, and the universe finally delivered it.

The glorious piece of nerd-candy reached his hand across the counter and said, “Hi, I’m Alexandre.”

Man-shopper’s mouth – (silently: Shut up, brain.)  “Thanks for seeing me even though you’re a technically a computer guy.  My iPod is very ill.”

Thankfully, I managed to aim the swoon onto a stool.  It wasn’t graceful, but it was effective.

I took a couple of seconds to recover, and then proceeded to explain my iPod’s condition.  Alexandre verified that it was still under warranty, put his hand over mine (could he have felt my racing pulse, do you think??), and said, “No problem.  We’ve got you covered.  I’ll have a new iPod for you in a few minutes.”

I was head over heels.  Any man who gives me free Apple products is marriage material in my book.

I watched him as he searched around for my new iPod Touch.  The blue t-shirt was a snug fit on him, so I could admire the way his muscles as moved as he rummaged through drawers and opened boxes.  A few minutes later, he was handing me a new iPod and my receipt.

Man-shopper’s brain – “Oh no!  This means that our interaction is ending!  Quick, do something to prolong it!  FLIRT.”

Man-shopper’s brain – “AAAAARGH.  You are such a dumbass.”

Man-shopper’s brain – “Go on.  Ask him out, goddammit!  This is your chance!”

Man-shopper’s mouth – “Cool!  Thanks so much for your help, Alexandre.  Bye!”

Brain was absolutely right.  I let another dream-boat slip through my fingers because… well… I’m incompetent.  Right now, this is what my brain is saying:

“This Man-shopper fool is a waste of my good sense.  I need to find another body with a mouth that will actually listen to me.

I made another Genius Bar appointment for this week.  This time, Brain and I are going to have a serious strategy meeting before I go in there.