I’ve come to the realization that I am a lucky, lucky lady.  It’s been over four months since I signed up on the adopteunmec dating website, and I have not once experienced any the following undesirable situations, all of which people assure me are common occurrences on the site.

As an online-dater, I have never been

Therefore, I must conclude that there must be something about my profile that deters these fuckers in the first place.

So for the past month, I have been conducting side experiments to answer this question: what will it take to attract pervy internet prowlers? 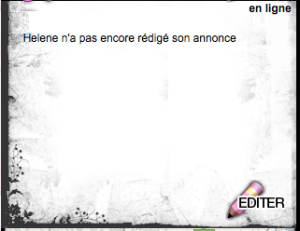 The traffic on my profile increased five-fold.  I received three times as many charms per day as I did before.  I saw an increase in the number of emotional and pathetic messages.

Overall, an interesting result, but no pervy messages or pictures as I had hoped.

I slutted it up

I kept the rest of my profile blank, but I filled out the questionnaire section about my sexual preferences — everything from my favorite type of panties to my sexual position of choice.  I was very methodical; I just ticked every single box.

I actually checked so many items that the system refused to acknowledge all of them and kept dropping a bunch of them from my profile.  It was some sort of system bug, and I gave up trying to resolve the issue.

Needless to say, I learned some choice vocabulary from all this…

My profile traffic doubled.  No surprise there.

But the most entertaining outcome of this experience: so many messages that I received included some variation of: “I was attracted to you after reading your profile.”

However, still no perviness!

After all the work I put into sluttifying my profile, this was disappointing, to say the least.

n.b.  Scroll down to the end of this post for the French-English vocabulary breakdown… in case you’re curious or in case you actually need to know.

After the failure of Experiments #1 and #2, I had to pull out all the stops.

I changed my primary profile picture to one in which I was dressed as Marilyn Monroe for Halloween.

After many drinks, this also doubled as my Tila Tequila costume... And no, I won't post that picture here.

My blonde profile picture only lasted 24 hours before it was taken down by adopteunmec’s site administration.  Apparently, my photo was flagged for one or more of the following reasons:

I was miffed.  But highly amused at the same time.  Provocative?  Who, me?  Or that blonde tart in the photo?

Although Experiment #3 was cut short because some asswad reported me to the authorities, I was at least able to gather some data during the 24 hours that my blonde profile was active.

My profile traffic definitely saw a significant boost, and I did receive quite a number of messages in which the man-products extolled my lovely “hair.”

However, I did not achieve the intended goal of attracting internet riffraff.  Operation Perv-Magnet failed yet again.

Short of begging for pervy pictures in my profile, I did my best to bring out the pervs.  Therefore I must conclude that I may inherently be a perv-deterrent — regardless of whatever my profile says or looks like.

I know that this is a good thing.

So why am I a little disappointed?

Because I am a bored singleton with a twisted sense of humor.

boules de geisha [f.] – geisha balls obviously, but also known Ben Wa balls… if you don’t know what these are, here’s a link to a tame wikipedia article

side note: It’s interesting to see which items are masculine and which are feminine…  Also, dear francophone readers, let me know if I got anything wrong.